Last week, African Heads of State and Government launched 2018 as the African Anti-Corruption Year, a move that if implemented will solve one of Africa’s biggest challenges.

Corruption is a monster that has brought many African nations’ economies to their knees, and threatens to destroy many more if left unchecked.

Corruption has not only deepened Africa’s woes, it has also subjected women to specific gender-based forms of corruption such as sexual harassment, extortion, sex for services and promotion, among others.

It is a fact that all forms of corruption embody gender discrimination and inequalities, which in return disempower women, children and the youth.

And due to gender inequalities, a majority of women cannot access alternative private service provisions when the public sector collapses under the heavy weight of corruption, since they cannot afford them.

The very poor in the society – slum dwellers and rural folk – are the ones who bear the brunt of corruption in any country. It is unfortunate that women have been exposed to the impact of corruption more than any other demographic group.

Even in institutions of higher learning, female students have long been subjected to “sex for marks” arrangements, where sex corruption is used to attain favourable marks and hence entry into the job market, where women are once again compelled to exchange their bodies to attain promotions.

It is a fact that corruption has a direct impact on health indicators such as infant and child mortality, maternal mortality, and access to family planning services. As a result, the health and quality of life of women and children is greatly affected.

During the African Union 30th Assembly of Heads of State and Government, the meeting adopted the declaration of the 29th meeting held in January 2017.

As matters stand, African governments and all persons from all walks of like will now embark on a journey to curb corruption.

Corruption is a social ill so rampant in the continent that the conscience of those involved in huge scandals has been seared. In fact, they are celebrated and voted into political offices.

Corruption may take the forms of bribery, extortion, nepotism, embezzlement, kickbacks, influence peddling, as well as the hawking of illegal and banned substances in a country.

There is no way Africa can attain socio-economic development in the midst of the mega scandals that have rocked the continent in the recent past.

The scandals have hampered efforts to promote democratic governance, socio-economic transformation, peace and security, and the enjoyment of human rights in a significant portion of the continent.

Public confidence in the ruling governments has been eroded by the huge misappropriation of funds. The public no longer has confidence that current or subsequent governments will fight the menace. This has left the continent with the same old tired and corrupt leaders being recycled year in year out.

Because of corruption, service delivery in health and education sector has been compromised with women disproportionately affected. 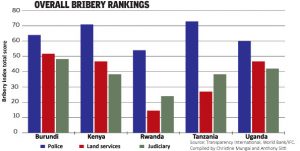 Across the East African Community, corruption is rife, government expenditures across the six partner states have been seriously affected, and delivery of essential services to citizens – such as education, hospitals, roads, supply of water and electricity – has become a nightmare.

It is unfortunate that according to the World Health Organisation, approximately two billion people lack regular access to medicines, with the main contributing factor being corruption – especially in the procurement of drugs.

Certainly, the world cannot attain the Sustainable Development Goals of universal healthcare with such indicators.

The situation in Africa – and closer home in East Africa – is grim. It is estimated that up to 25 per cent of the GDP of African Countries is lost to corruption every year. If left unchecked, this sad scenario will explode to unmanageable levels.

More than just declaring 2018 African anti-corruption year, countries should commit to implementing and following the law to the letter, especially anti-corruption laws within their legislation. The laws must not just be followed but must be seen to be followed.

Criminals, who have embezzled public funds belong to jail, and stolen loot must be repossessed and returned to the public purse.

Laws must be stringent, with no room for loopholes. Africa can ill afford to give corrupt individuals any breathing space.