The number of internet users in Tanzania rose by 16 per cent at the end of 2017 to 23 million, with the majority of them using their handsets to go online, the telecom industry regulator said on Friday.

Mobile phone use has surged in Tanzania and other African countries over the past decade, helped by the launch of cheaper smartphones and data services.

Around 19 million internet users in Tanzania accessed the World Wide Web last year through their mobile phones, up from 18 million in 2016, the state-run Tanzania Communications Regulatory Authority (TCRA) said in a report.

Internet penetration in the nation of around 52 million people ticked up to 45 per cent in 2017 from 40 per cent a year before, according to the regulator. 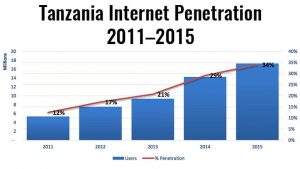 The fast-growing sector has been hit by tighter regulations and a price war among the operators in recent years.

Mobile network operators said they were complying with a government-imposed requirement for all telecom companies to list at least 25 per cent of their shares locally.

Tanzania hopes mandatory listing of telecom companies will improve transparency and offer the public a share in the industry’s profits.

No man deserves losing his manhood to domestic vice

Why Zanzibar Union with Tanganyika is a 'sham'