Pan-Africanism is as old as pangs of slavery, colonialism and imperialism are. However, the narrative has since remained in the lips of activists, scholars and leaders alone.

A newly founded centre intends to reinvent the wheel of the worldwide movement for over 1 billion plus people of African descent to live up to it and celebrate its aura.

The current institutional framework is characterised by organisational fragmentation, multiplicity of focus areas, and unclear division of labour between and among the African Union (AU) Commission, the regional economic communities (RECs), other regional mechanisms and member states.

Rwandan President Paul Kagame pokes all these holes in the AU, as he unveils on behalf of his team of experts a Report on the Proposed Recommendations for the Institutional Reform of the Union on January 29, 2017.

Also diagnosed in the report is the perception of limited relevance to African citizens, limited managerial capacity, lack of accountability for performance at all levels and overdependence on partner states’ funding.

Dubbed Pan-African Centre for Policy Studies (PACPS), the non-for-profit institution based in Arusha, Tanzania, is now taking a thorough stock of the oldest drive to find out barriers inhibiting its ownership at grassroots level.

“We want ordinary Africans to understand exactly where we are heading for as a continent, not only seeing our leaders gathered in Addis Ababa (Ethiopia) and elsewhere,” Judica Amri-Lawson, the PACPS Chairperson, says.

The centre recently brought together researchers, politicians, bureaucrats and practitioners from across Africa and outside the continent to Arusha to discuss ways of fast tracking unity among Africans states.

The Pan-African movement believes all people of African descent share a common fate and that unity among them is inevitable if they are, at all, to achieve meaningful economic, social, and political progress.

The Organisation of African Union — now the AU — is actually the brainchild of the movement.

Thanks to Haile Selassie, Julius Nyerere, Ahmed Sokou Toure, Kwame Nkruma, Thomas Sankara and Muammar Gaddafi for embracing the alliance aimed at encouraging and strengthening solidarity among Africans and their counterparts in the diaspora.

“Unless African countries are united, they will not have economic, political and social muscle they need for competing with the rest of the world in the wake of globalisation,” Dr Azaveli Lwaitama, a senior lecturer from Josiah Kibira University College in Tanzania, says.

Article 88 of the 1994 Abuja Treaty provides the design of the Union of the continent which is currently fraught with fragile democracies, civil strife, discriminative cultures and abject poverty.

The Treaty wants the continent to be united gradually, with its eight regional economic blocs serving as its stepping stones.

The Africa we want is an integrated continent, coordinated, politically united, based on shared values and ideals of Pan-Africanism and vision of African renascence,” Ms Judica Amri-Lawson, PACPS Chairperson

These are the Community of Sahel-Sahara States (CEN-SAD), the Common Market for Eastern and Southern Africa (COMESA) and the East African Community (EAC).

Others are the Economic Community of Central African States (ECCAS), the Intergovernmental Authority on Development (IGAD), the Southern African Development Community (SADC) and the Arab Maghreb Union (UMA).

“The purpose of this first Annual Arusha Symposium is to see why so many charters and resolutions in place have not been realised. What is holding us back,” Ms Amri-Lawson says on the sidelines of the three-day forum in Arusha.

“The Africa we want is an integrated continent, coordinated, politically united, based on shared values and ideals of Pan-Africanism and vision of African renascence,” Ms Amri-Lawson describes.

PACPS tasked the think tanks to brainstorm and come up with coherent and efficient ways for the regional economic communities (RECs) to play the role of building blocks of the greater AU as they were meant to be.

The participants were also assigned to hear theoretical frameworks, empirical findings and policy recommendations from commissioned researchers in a bid to identify best harmonisation and coordination mechanisms to inform upcoming policies.

Only people living along the borders are conversant with the revived EAC, he observes, calling on deliberate measures to promote the integration process across the region.

The process is not adequately reflected in the education curricula on the continent, especially at tertiary level.

“The curricula should aim at beefing up patriotism to reach a point whereby I can identify myself as a Haya and then an African,” he explains, stressing that national boundaries are mere farce colonial regimes had fabricated to mislead Africans.

Pan-African Parliament Deputy Clerk Yusuba Jobe admits saying AU is the right vehicle towards development of the continent, but it is inflexible and laden with many strategic organs.

“At times it is difficult to bring together all institutions and organs for coordination and cooperation towards the main AU goal,” he says.

Jobe highlights the importance of the integration process in preventing the continent from being fragmented further into small countries as was the case with the colonial era.

Africa has of late witnessed session of its youngest state of South Sudan, as some pockets in Somalia, Zanzibar and Kenya’s coastal belt are mulling over pursuing a similar path.

Some of the countries are even not viable states and have no capacity to negotiate deals with multinational corporations, let alone other big countries, says Jobe, adding:

“It is urgent that this continent comes together so that we can pull our resources and knowledge to always get good deals when negotiating with the rest of the world.”

Jobe regrets that Africa is the most endowed continent in the world with a largest share of natural resources, yet it is home to the high proportion of poor people.

“This is not just because of exploitation by foreign corporations, but also due to corruption on high scale,” he says.

“We are losing billions of dollars to corrupt banks, we’ve to come together as one family in order to stop such loses, get back the looted funds and use them for people. The movement of the AU fore fathers was meant for this,” he says.

However, Jobe says the movement calls for structures, people, and knowledge and know how to make it work. ends

AFRICA IN NUMBERS
1:5
The expected ratio of African population to the rest of the world by 2030

93
The percentage of Africans with access to mobile phone service

1
The percentage of Africans with access to wastewater systems

1/3 (One-Third)
The number of women holding parliamentary seats, with Rwanda having the highest proportion of them worldwide

$105
The UN-estimated losses in billions sub-Saharan Africa suffers a year owing to discriminatory gender policies; this is equivalent to 6 per cent of the region’s GDP 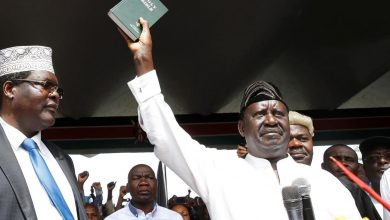 How states ‘set ground’ for contempt of court orders