Friday October 19, 2018
By Joe Lihundi
Tranquility News Reporter, Arusha
Political leaders and the East African citizenry at large have to consider swallowing their pride if they are to successfully fast track the East African integration agenda, a Germany envoy has said.
The Germany Ambassador to Tanzania, Dr Detlef Wächter, said the EAC also needed strong organs, saying leaders would change from time to time, but the “institutions will be here to stay”.
“Political leaders and the citizenry have to sacrifice their sovereignty for the region to realise the integration agenda,” reiterated Dr Wächter, vowing that Germany would continue supporting the integration bid for the next 20 years.
“We’ve been in East Africa for 100 plus years, it’s our obligation to support the region,” said the diplomat cum historian, political scientist and lawyer.
He said Germany could inject funds, but without strong institutions with which to implement projects, the support could not make the region a better place for East Africans.
“It’s up to you the EAC organs’ staff to take the process to new heights,” stressed Dr Wächter when speaking on the sidelines of the commemoration of 20 years of cooperation between Germany and the EAC in Arusha recently.
The commemoration saw Germany dish out Euros 61.5 million for what Dr Wächter said the quest for realising expectations and aspirations of ordinary citizens in the EAC integration process as expressed in an exhibition displayed during the ceremony.
The support comes after months of negotiations aimed at reviewing the two-decade long EAC-Germany cooperation, with the bloc insisting that it needed result-oriented ties this time around.
“I am looking forward for cooperation of not only EAC receiving money, but also of interacting and sharing ideas for the betterment of the lives of our peoples and offspring,” the EAC Secretary General, Mr Liberat Mfumukeko, said.
Relations between Africa and Germany were deeply rooted in history, dating back to 1682 when the European country settled in Gold Coast, now Ghana, recalled Mr Mfumukeko, wondering: “Why are we talking about 20 years of cooperation with Germany.”
Bantu languages had borrowed many words from German, including shule, a word for school, as a result of long interactions with people from the European country, he explained.
Although the relations sometimes were rocky, Germany had not only learnt a lot from East African, but also had a lot to share, especially now when the region was going through a myriad of challenges, including civil wars.
Mr Mfumukeko said Germany, which was one of three top donors in the EAC integration, had contributed Euros 120 million to the health sector in which the region had heavily invested in programmes.
“They’ve promised to continue supporting the sector,” he said.
Last year, Germany also started supporting the education sector in which it donated Euros 5 million to a scholarship programme aimed at improving mobility of students from selected schools across the region.
“Thanks to the Germany taxpayers, today they have announced that they will add another Euros 5 million to the programme,” the EAC Secretary General disclosed.
According to the Head of the Division East Africa a the Federal Ministry for Economic Cooperation and Development in Germany, Mr Niels Breyer, the support aims at assisting the EAC partner states in implementing development visions and reform goals of the
African Union’s (AU) Agenda 2063.
Of the funds, he said, Euros 9.5 million would be for promoting intra-regional trade through value addition in productive sectors, market access, customs process and harmonization of standards.
Mr Breyer said Euros 1 million would be for strengthening infrastructure in the region and Euros 13 million for the regional Network of Laboratories for Communicable Diseases.
Share
Facebook Twitter LinkedIn Tumblr Pinterest Reddit VKontakte Odnoklassniki Pocket WhatsApp Share via Email Print 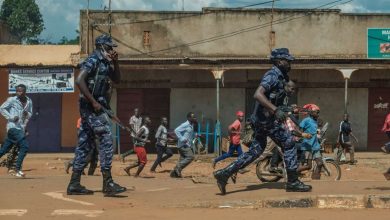