The East African Community (EAC) Secretariat has resolved to focus on the youth as it reflects on 20 years of the revived regional social-economic and political marriage.

Democratic Republic of Congo, Somalia and Sudan have shown keen interest in joining one of the Africa’s eight regional economic communities and the continent’s sole bloc aspiring to culminate into a political union.

The secretariat has launched a year-long campaign with a hive of activities targeting the youth across the region, the EAC Secretary General, Mr Liberat Mfumukeko, has said.

The EAC has put up new infrastructure and various positive policies, yet most of the youth, who make over 65 per cent of the East Africa’s population, are not aware of the role the bloc is playing in their respective countries.

The high-spirited campaign intends to take the integration agenda to ordinary East Africans for them to express on how they felt in the past 20 years and to suggest means that would work better for their lives in the coming years.

The drive will also give the EAC Secretariat and partner states’ agencies room to re-affirm their commitments to the noble agenda.

It will, among several other key stakeholders, closely engage the media, civil society, development allies and students in rejuvenating their lost enthusiasm in the agenda.

“The crusade will hopefully ignite and sustain the enthusiasm and create a new momentum that will inspire each of us to dearly own the integration agenda,” Mr Mfumukeko stressed.

The campaign, which is touted as The EAC I Deserve, eyes to reach out to over 10 million East Africans, mostly the youth, in the next one year.

“Demographics dictate that the youth must actively engage in the integration process, for the bloc is theirs and the EAC Vision 2050 is their future,” Mr Mfumukeko said when launching the campaign recently.

Despite deepening awareness among them, Mr Mfumukeko believed the campaign would also capture and incorporate youth’s dreams and aspirations in the integration agenda.

The campaigns will motivate individual journalists and their media houses to take up regional integration issues as their key area of interests and as their specialised genre.

In so doing, the campaign would encourage constructive and innovative coverage on the EAC integration process in print, electronic and in online media.

“Healthy media coverage will provide the citizenry, investors and tourists with insights on the importance of the existence of the bloc and opportunities in store for them,” Mr Mfumukeko said.

Some men and women, who had sacrificed their altars of profit in the past 20 years for the integration agenda to reach where it is now, would be feted during the campaign.

Recognising unsung heroes and heroines in the region would inspire other East Africans, particularly the youth, to work smartly and tirelessly in realising the integration dream.

“Everyone likes a nice pat on the back, this campaign will also inculcate a culture of recognising them for their well-done jobs,” Mr Mfumukeko said.

The campaign will include social media interfaces and a regional Youth Videos and Animations Competition involving all six partner states of Burundi, Kenya, Rwanda, South Sudan, Tanzania and Uganda.

“A prize of $25,000 awaits 30 innovative youthful winners in the competition,” Mr Duncan Karari, the EAC consultant in the campaign explained.

Most of the EAC youth today being Information and Communication Technology (ICT) savvy prompted the EAC Secretariat to begin this major campaign with the Youth Video and Animations Competition.

“More activities will be unveiled, watch out for more details in the coming months, if not weeks,” Mr Karari said.

The whole idea behind the maiden video and animations drive is to enable the youth to capture real life stories about benefits the EAC had on the citizens’ lives, narrate challenges the EAC citizens are facing that can jointly be addressed, and to apprehend the citizens’ aspirations of the future EAC they want.

East African youth aged between 18 and 35 years are eligible for the contest. “They are at liberty to use any genre to produce the video or animation with the length of around 30 and 59 seconds,” Mr Karari explained.

Demographics dictate that the youth must actively engage in the integration process, for the bloc is theirs and the EAC Vision 2050 is their future,” Mr Liberatus Mfumukeko, the East African Community Secretary General.

The video or animation ought to demonstrate the real life stories about the benefits EAC has had on citizens’ lives, narrate challenges EAC citizens are facing and capture their aspirations of the future EAC they want.

“I encourage the youth across the region to produce and submit as many videos or animations as they wish,” Mr Karari said. 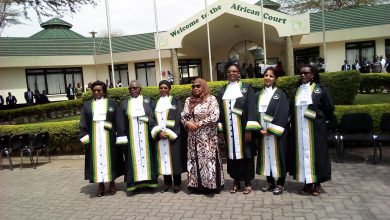